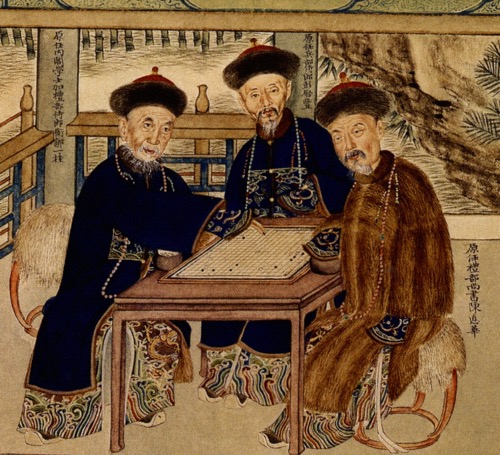 Men playing Go, perhaps in the Imperial Palace, in a painting from the Qing Dynasty. Source

The excerpt below is from Douglas Hofstadter’s article in the Atlantic (January 2018), The Shallowness of Google Translate, reprinted with the author’s permission.

From Women Sa (We Three), written by the Chinese playwright and translator Yang Jiang, who recently died at 104. Her book recounts the intertwined lives of herself, her husband Qian Zhongshu (also a novelist and translator), and their daughter. It is not written in an especially arcane manner, but it uses an educated, lively Chinese. I chose a short passage and let Google Translate loose on it. Here are the results, along with my own translation (again vetted by native speakers of Chinese):

After Zhongshu had worked at Tsinghua University for a year, he was transferred to the committee that was translating selected works of Chairman Mao. He lived in the city, but each weekend he would return to school. He also was still supervising his graduate students.

The leader of the translation committee of Mao’s works was Comrade Xu Yongying, and the person who had arranged for Zhongshu to do this work was his old Tsinghua schoolmate, Comrade Qiao Guanhua.

On the day this appointment was decided, after dinner, an old friend specially hired a rickshaw and came all the way from the city just to congratulate Zhongshu. After our guest had left, Zhongshu turned to me uneasily and said:

“He thought I was going to become a ‘South Study special aide.’ This kind of work is not easy. You can’t hope for glory; all you can hope for is to do it without errors.”

After a year of work at Tsinghua, he was transferred to the Mao Translating Committee to live in the city and back to school on weekends. He is still a graduate student.

The leadership of the Mao Tse Translation Committee is Comrade Xu Yongjian. Introduction to the book to do this work is Tsinghua students Qiao Guanhua comrades.

On the day of the event, after dinner, an old friend hired a rickshaw from the city to congratulate. Guest to go, the book of fear in the book said to me:

He thought I had to do “South study walking.” This is not a good thing to do, not for meritorious service, but for nothing.

I’ll focus in on one confusing phrase I ran into—a five-character phrase in quotation marks in the last paragraph (“南书房行走”). Character for character, it might be rendered as “south book room go walk,” but that jumble is clearly unacceptable, especially as the context requires it to be a noun. Google Translate invented “South study walking,” which is not helpful.

Now I admit that the Chinese phrase was utterly opaque to me. Although literally it looked like it meant something about moving about on foot in a study on the south side of some building, I knew that couldn’t be right; it made no sense in the context. To translate it, I had to find out about something in Chinese culture that I was ignorant of. So where did I turn for help? To Google! (But not to Google Translate.) I typed in the Chinese characters, surrounded them by quote marks, then did a Google search for that exact literal string. Lickety-split, up came a bunch of web pages in Chinese, and then I painfully slogged my way through the opening paragraphs of the first couple of websites, trying to figure out what the phrase was all about.

I discovered the term dates back to the Qing Dynasty (1644–1911), and refers to an intellectual assistant to the emperor, whose duty was to help the emperor (in the imperial palace’s south study) stylishly craft official statements. The two characters that seem to mean “go walk” actually form a chunk denoting an aide. And so, given that information supplied by Google Search, I came up with my phrase “South Study special aide.”

It’s too bad Google Translate couldn’t avail itself of the services of Google Search as I did, isn’t it? But then again, Google Translate can’t understand web pages, although it can translate them in the twinkling of an eye. Or can it? Below I exhibit the astounding piece of output text that Google Translate super-swiftly spattered across my screen after being fed the opening of the website that I got my info from:

“South study walking” is not an official position, before the Qing era this is just a “messenger,” generally by the then imperial intellectuals Hanlin to serve as. South study in the Hanlin officials in the “select chencai only goods and excellent” into the value, called “South study walking.” Because of the close to the emperor, the emperor’s decision to have a certain influence. Yongzheng later set up “military aircraft,” the Minister of the military machine, full-time, although the study is still Hanlin into the value, but has no participation in government affairs. Scholars in the Qing Dynasty into the value of the South study proud. Many scholars and scholars in the early Qing Dynasty into the south through the study.

Is this actually in English? Of course we all agree that it’s made of English words (for the most part, anyway), but does that imply that it’s a passage in English? To my mind, since the above paragraph contains no meaning, it’s not in English; it’s just a jumble made of English ingredients—a random word salad, an incoherent hodgepodge.

In case you’re curious, here’s my version of the same passage (it took me hours):

The nan-shufang-xingzou (“South Study special aide”) was not an official position, but in the early Qing Dynasty it was a special role generally filled by whoever was the emperor’s current intellectual academician. The group of academicians who worked in the imperial palace’s south study would choose, among themselves, someone of great talent and good character to serve as ghostwriter for the emperor, and always to be at the emperor’s beck and call; that is why this role was called “South Study special aide.” The South Study aide, being so close to the emperor, was clearly in a position to influence the latter’s policy decisions. However, after Emperor Yongzheng established an official military ministry with a minister and various lower positions, the South Study aide, despite still being in the service of the emperor, no longer played a major role in governmental decision-making. Nonetheless, Qing Dynasty scholars were eager for the glory of working in the emperor’s south study, and during the early part of that dynasty, quite a few famous scholars served the emperor as South Study special aides.